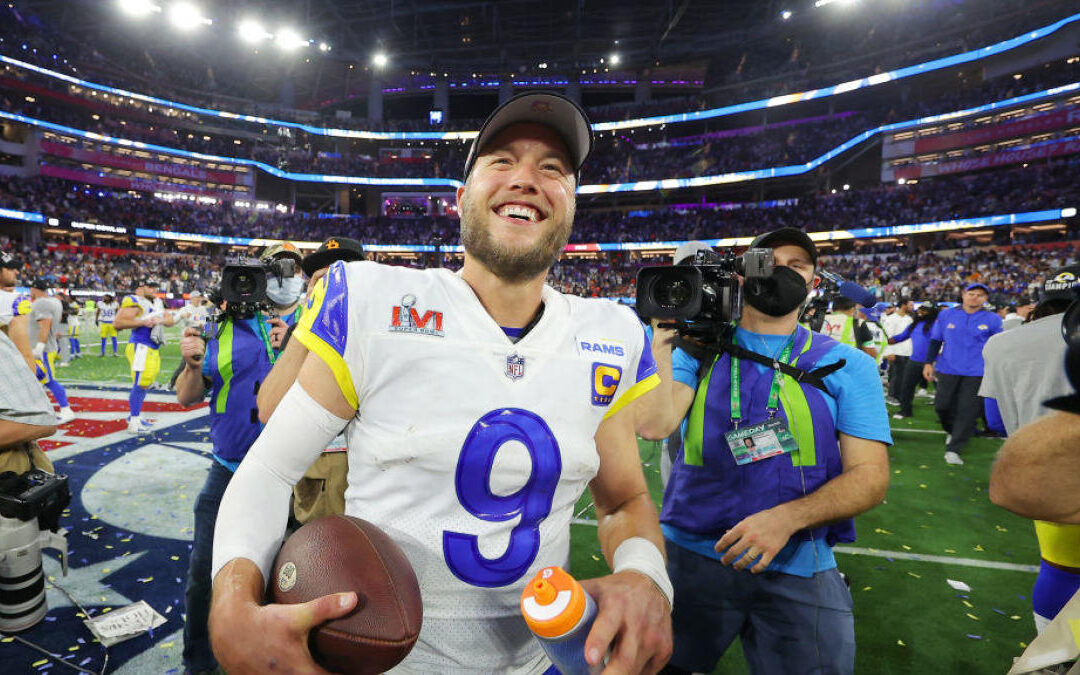 What winter weather, high gas prices and Matthew Stafford can teach us about intelligent investing.

If you live in Michigan, you’re probably familiar with the following scenario.  Let’s imagine we have a winter where we suffer through record snowfall and your two-wheel drive sedan gets stuck routinely on the way to work.  Life is miserable.

The following year, you resolve to ‘not get fooled again.’  When your lease is due, rather than the same old sedan, you splurge on the four-wheel drive SUV complete with the super arctic trim package and ski rack.  It doesn’t matter if you don’t ski.  You want to be prepared

Once you buy the SUV, it seems to stops snowing in Michigan. The following year we have record low snowfall. You shovel once or twice and you even have to remind yourself how to turn on the four-wheel drive on the rare occasion you need it.  Come spring, you lament your $750 car payment and 15 mile per gallon when gas is over $4.00

At least you have the ski rack, the next owner will really enjoy it.

The picture below says it all. 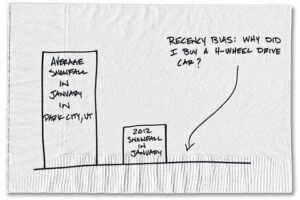 If this has ever, been you, don’t feel bad. You have just experienced recency bias. We all have it.

Recency bias is the tendency to place too much emphasis on experiences that are freshest in your memory—even if they are not the most relevant or reliable. recency bias can be hard to avoid. We display recency bias when we make decisions based on recent events, expecting that those events will continue into the future. For example, right now with gas hovering over 4.00 a gallon, how many of you are thinking of going with an electric vehicle in the future?

Recency bias is found everywhere but especially in sports and investing.  For example, on the local gridiron scene, fans and pundits alike tend to base their predictions based on the most recent outcome. If you don’t believe me, tune in to sports talk radio on Monday morning.

As of 2021 he was a bad quarterback. He was called an underachiever, a stat hog, and a poor leader.  He had exactly ZERO playoff wins.   In 2022, he is a top 5 quarterback, a come from behind hero, a Super Bowl champion and a possible future hall of famer.

What a difference a year makes.

Stafford is the same guy as he was a year ago.  Even with the super bowl win.  It’s our perception of him that changed because on his recent success.  We conveniently forget the fact that he is 34 years old and has 13 NFL seasons.  One season made the difference.

In the investing world, recency bias can be hard to avoid.  Investors display this bias when they make decisions based what’s happening now, good or bad, expecting that the current state to continue long into the future. It can lead them to make irrational decisions, such as following a hot investment trend or selling securities during a market downturn.

Right now, we are in the midst of a major market pull back.  The Russian invasion of the Ukraine has shaken already nervous markets. President Biden has now banned all Russian energy imports.  Gas is skyrocketing and looks to be headed higher.  Things look bad.

What do you do at a time like this?  Do you sell all of your stocks?  Many of you are tempted right now.

How do I beat recency bias?

It helps to take maintain a long term perspective look at the broader picture.  For example, a little less than two years ago gas prices were hovering around 1.00 a gallon.  Heck, the price for oil went negative one month!   Now oil is as high a Stafford’s popularity.

Will the present state remain the same? Will the former Lions loser repeat as a champion?  Will gas stay at 5.00 a gallon?

History says no.  Sorry Stafford fans, oil, like the Rams QB, will eventually fall back to earth.

If you are getting really nervous, something as simple as taking a deep breath works.  Emotions are the enemy of reason.  Nothing stokes the fire nowadays quite like the media so try and take a media diet.  Personally, I haven’t been able to take my eyes off the set since the invasion began.  Like you, my family and I are praying for peaceful outcome.

But…this is a big BUT, I don’t make investment decisions from what I see on CNBC, CNN or Fox News.  I haven’t altered my portfolio one bit since Russia invaded.

What gives me the confidence to stay the course?   I think the quote below from March of 2020 answers that question.

“If markets are good at one thing, it’s reminding investors that stock prices don’t simply go up, uninterrupted, forever. Markets decline. It’s an unavoidable part of investing. What matters is how you respond. Or, more to the point, how you don’t respond in some cases.

Because if you’ve built a portfolio that matches your time horizon and risk tolerance when markets are calm, then a surge in turbulence may not feel so devastating; especially if you have adopted discipline around diversification and regular rebalancing.”

The Dow Jones Industrial Average dipped below 19,000 at one point when this article was published. For some perspective, the DJIA remains over 33,000, even now.

What if we had used the ‘present’ in March of 2020 as our GPS for decisions about the future?  How well do you think that would have worked out?

Do you see the danger in recency bias?

We have a saying in Michigan. If you don’t like the weather, just wait 15 minutes, it will change.  Apply that same feeling to the markets.

Not every winter will have record snow. Gas won’t be 5.00/gallon forever. Stafford won’t win the super bowl every year. The stock market will rebound.

Last year, we were focused on Covid, Bitcoin and Gamestop stock.  And the Lions were bad.

This year, it’s OIL, Russia and inflation. And the Lions are still bad.

Want to hazard a guess what next year will be?   Not me.

Tweets by missionptplan
Securities, financial planning and advisory services offered through LPL Financial, a Registered Investment Advisor, Member FINRA / SIPC. Check the background of your financial professional at FINRA's BrokerCheck. The LPL Financial Registered Representatives associated with this site may only discuss and/or transact securities business with residents of the following states: MI, CA, NH, NE, TX, MS.
LPL Financial and its representatives, Mission Point Planning and Retirement do not provide tax or estate planning advice. These services are provided in conjunction with a qualified tax and/or estate planning professional.
This site is published for residents of the United States, is for informational purposes only and does not constitute an offer to sell, or a solicitation of an offer to buy, any security or product that may be referenced herein. Persons mentioned on this website may only offer services and transact business and/or respond to inquiries in states or jurisdictions in which they have been properly registered or are exempt from registration. Not all products and services referenced on this site are available in every state, jurisdiction or from every person listed."