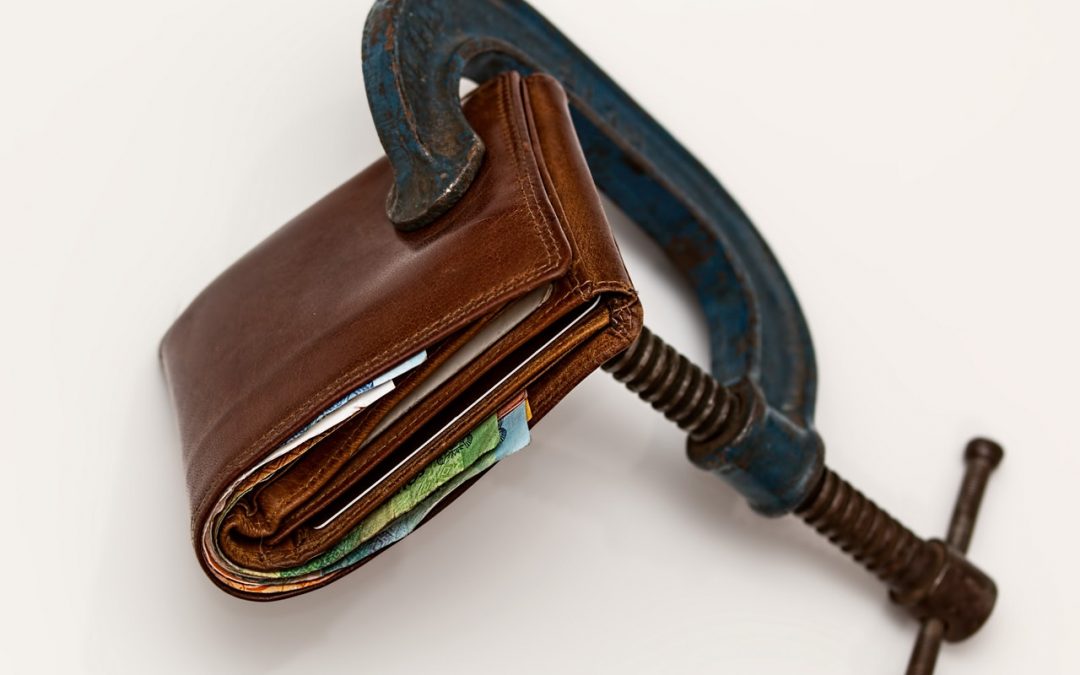 Based on the Social Securities recent press release*, it’s anticipated that FERS and CSRS retirees will only receive a 1.6% raise on their pensions for 2020. While that was less than the 2.8% COLA from 2019, it’s still one of the larger ‘raises’ in the past decade.

Maybe not. The announced increase is being met with less than thrilling optimism. For example, take a look at this recent tweet from the National Associations of Retired and Federal Employees: 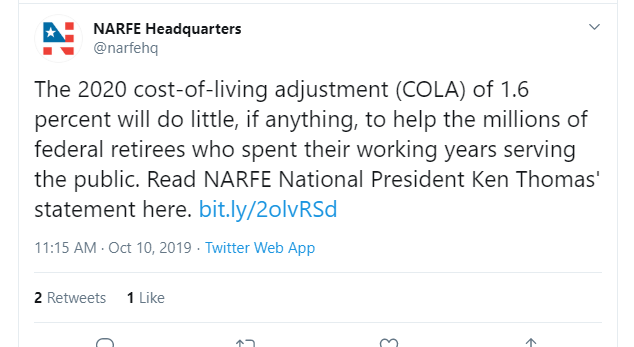 So, is this raise, or ‘cost of living adjustment’ even worthwhile? President Ken Thomas of NARFE doesn’t think so. He cites in a press release that with FEHB premiums going up 5.6% and other increases in retiree costs, that the COLA formula is based on the wrong consumer price index. Instead, he believes that it should be based on the CPI-E (E for elderly) rather than CPI-W (W for worker).**

The main difference between CPI-W and CPI-E is the proportion allocated to medical-care spending, which for the elderly is roughly double that of the general population. The elderly also spend more on shelter.

Before we get into the debate of the true cost of living for retirees and the merits, let’s look first at how COLA’s are actually calculated right now.

CSRS retirees receive the actual full % COLA in retirement and the FERS retirees typically receive a reduced amount based on a formula determined by OPM. (www.opm.gov)

For example, if the CSRS cola is …

Generally speaking, the cola for CSRS will keep up exactly with inflation and measured by CPI-W.  Traditionally, the COLA for FERS over long periods of time will be slightly below CPI-W.

For example, between 2010 and 2019 the difference between COLA’s looked like this:

As you can see, the lower the COLA for a year, the narrower the spread becomes between FERS and CSRS. For the last 10 years during a period of low inflation, having any COLA at all might not even seem that important.

Before jumping to conclusions, let’s reference a different time for comparison. From 1990-2000 we saw more inflation, but also bigger spreads between FERS and CSRS Cola’s.

The same $40,000 FERS pension would have seen an increase to $51,152.32 during the 10-year cycle.  That’s certainly a larger jump, but only because prices rose more that decade.

Let’s return to the question, does the current COLA (based on CPI-W) going to cut it for Federal retirees?

A Dec. 2011 analysis from the U.S. Bureau of Labor Statistics found that medical care expenditures are considerably higher for seniors as a percentage of their spending than for working Americans. Likewise, more money was spent on housing costs for seniors than working Americans. Conversely, the CPI-W places greater emphasis on transportation, education, entertainment, apparel, and food costs than what seniors typically spend.  The result? In 33 of the past 35 years medical care inflation has outpaced Social Security’s COLA.

So, it would seem that it makes sense for COLA’s to be based on some other form of measurement other than CPI-W? But will actual relief come in the form of larger COLA’s?

There is hope in the form of a current resolution in the house – introduced in March – H.R. 1553, the Fair COLAs for Seniors Act, would require COLAs for federal retirement annuities and Social Security benefits, as well as for military retirement and veterans’ benefits, to be based on the CPI-E, instead of the CPI-W. However, this proposed legislation has not been considered by any of the four House committees with jurisdiction over it.***

Any increase in COLA’s has major opposition as well. In this year’s Fiscal budget, the White House proposed eliminating FERS COLA’s entirely and reducing CSRS Cola’s by .5% each year. This is the 3rd year in a row they’ve proposed changes to the COLA’s for federal employees.****

For now, our conclusion is that any increase in the COLA calculation for federal retirees is highly improbable. Political gridlock and the weak finances of the Social Security system makes it unlikely that raises for FERS and CSRS annuitants are forthcoming. Status quo on COLA’s may be the best thing FEDS can hope for foreseeable future. Any future increases in retirement incomes may have to come from other sources of income such as investment returns, real estate or other outside assets.